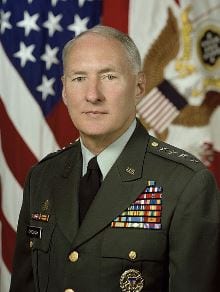 General Crouch is a graduate of Army and Navy Academy, Class of 1959, where he served as Battalion Commander. Following the Academy, he earned a B.A. from Claremont McKenna College and an M.A. from Texas Christian University.

His personal decorations include the Defense Distinguished Service Medal, the Silver Star, the Legion of Merit and the Bronze Star.

He is currently serving as the Vice-Chairman of Army and Navy Academy’s Board of Trustees; is a Senior Fellow with the National Post Graduate School in Monterey; serves on the Board of the Community Anti-Drug Coalitions of America and the Keck Institute for International and Strategic Studies at Claremont McKenna College.

He currently resides in Colorado with his wife, Vicki.