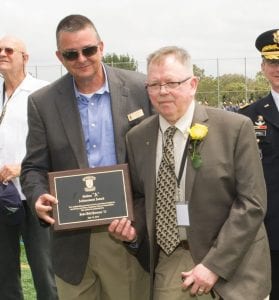 John Parsons ’72 graduated as a First Lieutenant, Class President, Silver A Recipient, Honor Council Member and the recipient of numerous other accolades.

After graduation, he began working in commercial building maintenance until 1981 when he integrated into the Marine Corp Medical, FMF Fleet Marine Force and trained at Camp Pendleton.

John served as Combat Medic during Desert Storm and Desert Shield. He was wounded during combat and suffered from head, neck and internal injuries, yet John insisted on returning to his unit as quickly as possible. Parson resumed duty as a team medic in Baghdad where he was severely wounded; he still has shrapnel in his back as a result of this injury. Despite his life threatening injuries he was able to tend to the injuries of others after the encounter.

Before being discharged in 1993, John received a Purple Heart, two Bronze Stars, Combat Action Ribbons, and many other awards. He was eventually classified as 100% Disabled by the Veterans Administration and served as Commander of VFW Post 1865 in Wisconsin for several years, a position he enjoyed very much.

John is married and resides in Kenosha, Wisconsin, where he has three children and seven grandchildren. Although he lives daily with the physical effects of his service to his country, John maintains a positive attitude, spends a great portion of his time helping local veterans, and collecting coins.