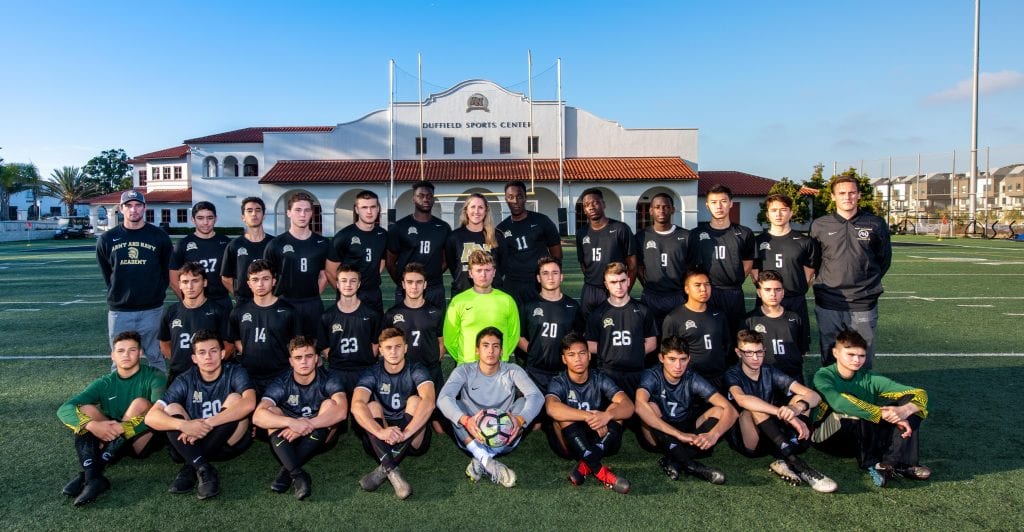 This season has been an interesting one for our fairly novice team. Although we had a large group of seniors, over half of them were not returners from last year. With that, for the first time in ANA’s history, we were able to field a JV and a Varsity team because of the number of players we had come out for the program. We started out working extremely hard at practices at the beginning of the season but were hit with a few tough blows with some losses in pre-season. With Coach Mindes Dorlean coming back for his fifth year as head coach and Coach Sarah Ortiz back for her ninth year as co-head coach, they finally were able to put together the right combination of players to best suit their skills. The boys continued to work hard, practicing special plays, exercising over holiday breaks, and coming back refreshed and ready for the regular season to begin. In addition, we also added an additional assistant coach, Brett Lietzke, and a goalie coach, Nick Ruiz, to help the team build their skills.

A few of our key players have been in the defense- Marco Satriano has been a force to reckon with as goalie and Danilo Tsurkan and Mohammed Faye have been key parts to our defense. Sophomore Eric Carlsson-Zhang improved greatly over the last year and is now one of our key starters. At midfield, we have consistently looked toward newcomer senior Pape Faye, freshman Conrad Sage, sophomore Holden Nguyen, and senior Paul Ferraro to lead the team. In the offense, we have benefitted from the work of Matias Ureña that has led to many goals being scored for the Warriors. Senior, Hugh Bennett, also a captain, has been an integral part to the midfield as a versatile player.

We finished the season with a 4-1-1 record in the league and 5-8-3 overall with a second place league finish. Unfortunately, our record this year didn’t merit making it to the playoffs, but the Cadets are committed to working hard to get there for next year.