From Zero to Shakespeare 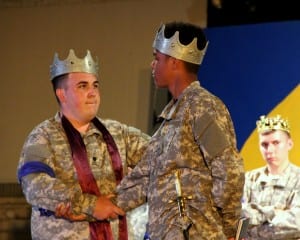 How does one go from zero to Shakespeare in the classroom, and specifically in an all-male environment?

Taking the stage for the first time is a challenge for most young actors. Stepping on stage for the first time to perform in William Shakespeare’s Henry V is a gauntlet most rookie actors would run away from immediately. But not the newly minted Drama Class at Army and Navy Academy, who met and surpassed all expectations with their standing ovation-inspiring performances.

When I arrived on campus last fall as the new Artist-in-Residence, my directive was clear: create the brand new curriculum for the Drama Class, structured to my discretion, with one tiny exception: a production of Henry V was already slated for the Spring.

While working on one of Shakespeare’s histories could be a daunting prospect to even the most seasoned of actors, my room full of energetic, charismatic, and intelligent Cadets did not shy away from the task. They were on board, and using the Academy’s training at the Gurian Institute as a resource, our rehearsal process leveraged the key characteristics of our all-male classroom environment in a way that would hopefully make Shakespeare even more accessible to them.

Beginning with “O For a Muse of Fire,” the opening lines of the play the Cadets learned on the first day of class, and continuing through a three-week workshop in the fall, and into the final production in the Spring, the Drama Class exceeded expectations with their continual discoveries about character, story and physical gesture.

Some Cadets found a calling in the theatre, eager to explore their roles in Henry V, to relate them to their own lives and to find expression on stage. New Village Arts Teaching Artists Savvy Scopelleti and Justin Lang provided fundamental classroom support to the students’ discovery of the poetry and magic of Shakespeare’s language.

At the end of the day, the magic of theatre prevailed and 27 Cadets took the stage to tell the story of one of the greatest battles ever fought, speaking some of the most famous words ever written. Those standing ovations were well-deserved.