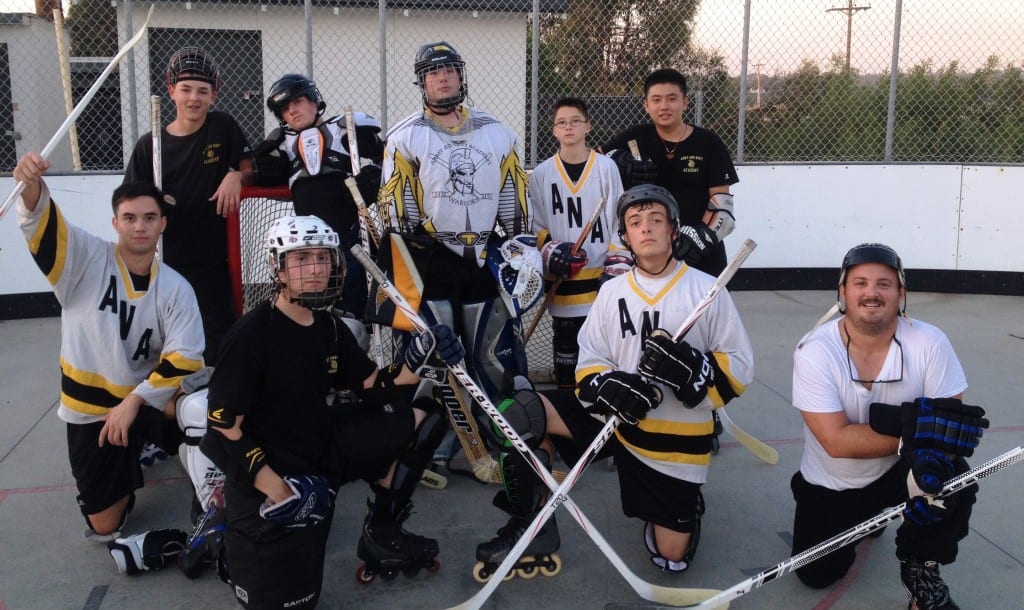 Army and Navy Academy has revived its historic hockey team!

It started last year with the introduction of the Hockey Club. Cadets met twice a week on the school’s own hockey rink, a rarity in Southern California. About 12 Cadets and Mr. South, the Club Advisor, would play ball hockey.

This year, 10 Cadets are engaging in a high school league against other like-skill level players. The Warriors will be competing against other high schools in the San Diego area, including schools such as Poway, Rancho Bernardo and Cathedral Catholic.

“Only 2 of the players have any previous hockey experience so we’re pretty much starting from the basics,” Said Coach South. “Myself and Coach (Nick) Hall are doing our best to teach the guys the basics of the game. Every day we get better. The most important part is how much fun the guys are having. I’m having fun too. I love this sport and I’m just trying to give back and share it with anyone who wants to learn.”

Mr. South didn’t learn about hockey till his 17th birthday.  “A lot of the guys are in the same boat I was at their age. They bought all the gear and show up to the rink every day, fired up to skate and learn. We’re really lucky because at most high schools who play hockey around the country, if you’ve never played the sport before, a lot of times it’s difficult to have a chance to play it. With our club team and the creation of San Diego District hockey, it gives young people a chance to learn the greatest game there is.”

The ANA Warriors begin their season on January 14, 2016 against the Poway Titans at 9:00 pm at the Escondido Sports Center. See their full schedule here.