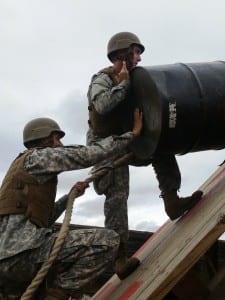 Cadet Rutledge recently spent time at the U.S. Naval Academy’s Summer Seminar – a fast-paced, six-day experience for high achievers who have completed their junior year in high school. It teaches about life at the US Naval Academy, where leadership is developed through rigorous academics, participation in athletics, and professional training.

Here, he shares his experience:

Where to start… when I arrived I was given a few shirts, shorts, and a pair of sweats to prepare me for the week when I would be living in Bancroft Hall at the United States Naval Academy.

As I walked to my room, I was amazed at the sheer size and beauty of the campus. I got to my room, unpacked, and met my roommates who, unknown to me at the time, were my squadmates. A short while later we were taken by a midshipman to play intramural sports with the other students who were at the seminar (there were close to 800 of us). During the game, I realized that all of these students were just like me – excited, happy to be at the Academy, and genuinely kind to each other.

The next day, we were woken up at 0545 to do a morning exercise called PEP. PEP is an early, pre-breakfast workout that focused on strength both as a team and individually. This first PEP was by far the easiest because we had to complete a Candidate Fitness Assessment (CFA) later that day. The CFA gauged how physically fit you were.

Sunday dinner was the first meal we shared as a squad, and was a great opportunity for bonding. During the meal we laughed, talked, and joked with each other. We also shared our personal backstories, explaining why we were interested in the Naval Academy.

We began instruction on Monday. We still did our morning PEP (at 0530 instead of 0600 and noticeably harder), followed by classes at 0830 until lunch. At first, I thought that the classroom time might be boring. Boy was I wrong… They were the opposite of what I expected – engaging, fun, and taught by some of the best professors in America.

I had six classes, three on Monday and on Tuesday; on Monday my classes were Physics, Math Topics, and Astronautical Engineering, which was my favorite of all six classes.

Tuesday was quite similar to Monday except for one thing – the morning PEP was led by a Navy SEAL rather than the midshipmen who usually led it. You can imagine the ferocity and dedication that this guy brought to PEP! We ended up doing some 300 pushups, 180 flutter kicks, and 200 setups in just over an hour. As hard as it was, it was so fun and a great way to build teamwork and confidence.

After PEP, we had our other three classes. Mine were Martial Arts, Shiphandling Simulation, and a Yard Patrol Craft (YP Craft) tour of the campus. By Tuesday night, my squad had become tight-knit and we all were enjoying our time at the Naval Academy.

Log PT was basically sit-ups, curls, and other exercises while holding a log and working as a team to complete the task. Swimming was divided into three parts – Water Polo, Water/Land PT, and Swimming 50 yards as fast as possible. Military Gear PT was PT with Rifles and Kevlar vests. The PT was not very hard, but was tiring because we had to crawl on our elbows while holding a gun, making sure it didn’t touch the ground.

Wet and Muddy PT was my favorite, and probably the hardest, they made a muddy ditch for us to make a human tunnel over, then teammates had to crawl through that tunnel. We also did Hill PT (bear crawls and duck walks up a big hill) and Animal PT (this one was awesome – we had to act like animals and sometimes quack like a duck for duck walks) The last activity of the day was E-course, a three mile long forest and obstacle course that we ran through as squads.

After E-course, we were done and took a bus back to the Academy where we quickly showered and prepared ourselves for the next activity of the day, mock indoctrination day. We were required to memorize a sheet of “rates” by the end of the week.

Sea Trials was incredibly tough but undoubtedly one of the best experiences of my life. I now feel that I am more ready and prepared for my future either at the Naval Academy or in the Navy. The U.S. Naval Academy truly is a place like no other, and it inspires people to become leaders on and off the field.