What Parents of Boys Should Look For in a School 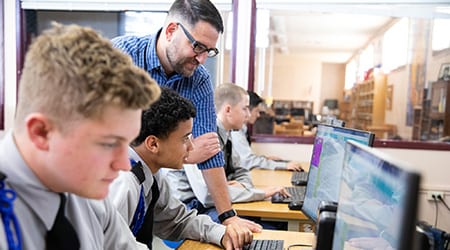 “We may not be able to prepare the future for our children, but we can at least prepare our children for the future.”   – Franklin Delano Roosevelt, 32nd President of the United States

Many of our nation’s schools today are struggling to provide a quality education that would prepare young people to become successful adults. However, a growing number of parents have become disenchanted with the education being provided by traditional public schools; particularly middle and high schools and have moved their children into either charter schools or even more so, into private schools. While, the specific reasons for doing so, vary, the common thread among their concerns was that the nation’s public schools were in need of vast improvement.

Today, roughly 5.7 million Pre-Kindergarten through 12th-grade students attend one of 3,457 private schools throughout the nation, according to the National Center for Education Statistics (NCES).  In one two-year period (2013-15), the number grew by 400,000 new students.

What are the problems public schools are facing?
In 2019, a Public School Review blog outlined the major problems that most education stakeholders agree are facing public schools; a summary of which follows:

So, what should parents look for in a school?
A review  and summary of various guides for parents seeking advice on choosing a school includes the following characteristics they should look for in grading prospective schools. For purposes here, we will focus on middle and high school.

There’s one school that has it all – and more
The Army and Navy Academy, a college preparatory boarding school for middle- and high school-age boys in Carlsbad, Calif. fits the above checklist and more. What follows are the reasons why:

Overall, the Academy’s central emphasis is its core belief in the boy – the unqualified belief that he can achieve or exceed any goal he sets for himself and that he should pursue independence and leadership in all that he undertakes, following the Academy’s tagline: “Be Bold. Be Brilliant. Be You.”