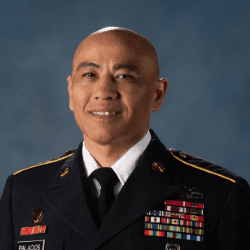 First Sergeant Jeffery S. Palacios was born in the South Pacific Island of Guam. He enlisted in the United States Army in July 1991 and attended One Station Unit Training at Fort Knox, Kentucky where he trained as a 19K Armor Crewman.

First Sergeant Palacios has served in every position from Tank Driver through Tank Commander, Platoon Sergeant, and Company First Sergeant. He has also served as a 19K Basic Noncommissioned Officers Course Senior Small Group Leader (SGL) and Senior Observer/Controller Trainer (OC/T). His assignments have included countless duty stations around the globe as well as two tours in support of Operation New Dawn – Iraq (May 2009-April 2010, August-December 2011) and a tour in support of Operation Enduring Freedom – Afghanistan (June 2012-March 2013). First Sergeant Palacios has been awarded The Legion of Merit, three Bronze Stars, and numerous other awards throughout his 27 years of dedication military service. He is also a recipient of both the prestigious medallions, the Order of Saint George (Armor Medallion) and the Order of Saint Maurice (Legionnaire – Infantry Medallion).

First Sergeant Palacios came on board as the LET I / II – JROTC Army Instructor, January 2020. His passion is to give back to the academy of cadets to facilitate their higher education, embark on their life as an adult, become better citizens and grow as young men within their community. He has greatly impacted the cadets not only in the classroom but his tireless effort to cultivate a culture of leadership and character growth.