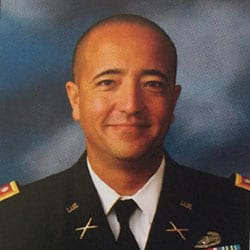 Lieutenant Colonel (Retired) Curby Scarborough, United States Army, received his ROTC commissioned as a Second Lieutenant in July 1993. He was born in Okinawa Japan, and raised in Savannah, Georgia and Asheville, North Carolina. His family (wife, two boys, mother, and sister) resides in Oahu with him. His military education includes the Field Artillery Basic and Advanced Course, Command and General Staff College, and the Joint Air Operations Center Course. His civilian education includes a Bachelor’s of Science in Business Administration from The Citadel, and a Master’s of Science Administration in Leadership from Central Michigan University. Lieutenant Colonel Scarborough awards and decoration include: the Combat Action, Air Assault, Parachutists, and Recruiter Badges; and the Global War on Terrorism Service, Afghanistan Campaign, NATO, Overseas, Army Achievement (2), Army Commendation (2), Meritorious Service (3), and the Bronze Star Medals (2).

Lieutenant Colonel Scarborough served 22 years in the US Army stationed in a variety of assignment around the world. He has held numerous positions outside of his specialty MOS (13A/Field Artillery), ranging from brigade plans and assistant operations officer, team leader of combat advisors, and most recently Chief of Current Operations, 25th ID. His combat deployments include Afghanistan on two occasions (OEF 08-09, and OEF 13). Lieutenant Colonel Scarborough is now serving as the Senior Army Instructor (SAI) at Army and Navy Academy, previously he served as the SAI of Saint Louis School of Honolulu (July 2015 thru June 2020). He has been married to his wife, Iraida Scarborough, for the past 21 years. His daughter and three grandkids reside in Oklahoma City, and his two sons are currently enrolled in college in the Pacific Northwest (at Seattle Pacific Univ, and the Univ of Oregon). In his spare time he enjoys walking his dog, making home improvements, and various sports.