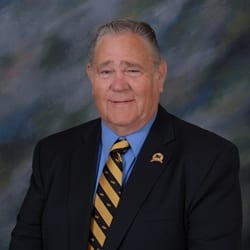 EDWARD R. ROE is a graduate of Army Navy Class of 1960. He studied General Education at UCLA. Early in his career, Mr. Roe was President of Trans World Aquatics, Inc., a company specializing in the wholesale of tropical fish and birds. After selling the business, he became Vice President of Patren Roe Construction, a company specializing in construction for the auto rental trade. He also served as Secretary/Treasurer of Advanced Touch Systems, which designed and constructed point of information and point of sale kiosks. Since 1987, he has been President of Electronic Marketing Communications which developed POI/POP terminals for Mercedes Benz, Lufthansa, Al Italia and several other companies. They also partnered with AT&T to develop and install driver’s license terminals for Arkansas and New Hampshire, and with Metron Optics to develop equipment for the medical field. He resides with his family in San Diego, California.