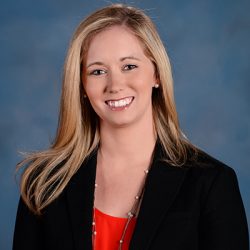 Lauren Smith returned to the Army and Navy Academy family in October of 2018 after spending two and a half years as the Event Manager for the American Liver Foundation, Pacific Coast Division.

Lauren was born and raised in Miami, Florida where she attended Florida International University’s Chaplin School of Hospitality Management, where she earned a Bachelor of Science in Hospitality Management and a Certificate in Event and Meeting Planning. While at FIU she had the opportunity to participate in the Food Network’s South Beach Wine & Food Festival as both an Event and Culinary Lead.  She also holds a Certificate in Nonprofit Fundraising from Boston University.  In September of 2013 she moved to San Diego with her husband to continue her career in nonprofit fundraising.

Previously she served as the Assistant Director of Events at the Army and Navy Academy and has worked as the Director of Development for the Coronado Schools Foundation, Director of Special Events for the Humane Society Naples, and as the Public Relations and Event Coordinator for the South Florida Firefighters Calendar.  Her passion for events and nonprofits can be seen throughout her career.

She has worked alongside The Ft. Lauderdale Billfish Tournament as a Committee Member, helping to organize all aspects of the Miami-Dade Tournament Inlet.  Lauren has planned and organized many nonprofit events raising between $50,000 up to $1.8 Million.

Lauren has been recognized by Cambridge “Who’s Who of Non-Profits” for demonstrating dedication, leadership and excellence for the work she has done. In January 2012, she was presented the “Thelma Gibson Award for Outstanding Service” by the Women’s Chamber of Commerce.  She currently is a Board Member for the San Diego Liver Coalition.