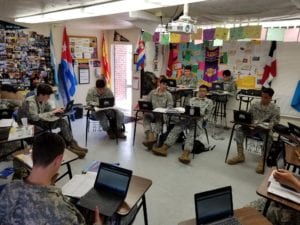 There’s been so much focus on what’s being taught in our schools’ classrooms that we’re apt to forget what needs to happen beyond the traditional school day to sharpen and add to students’ academic achievement while providing additional learning opportunities to transform young people into successful adults.

According to a National Center for Educational Statistics report a few years ago, the average American student spends 6.64 hours a day in class, leaving the remaining daylight hours for supervised or unsupervised activities, ranging from playing sports, doing homework, working at a part-time job, and participating in extra-curricular activities on one hand to “hanging out” at home or the mall, not doing much of anything.

While there are several program assets to optimize the quality of education our young people are receiving, there is one often-overlooked resource that a growing number of parents are now considering: Boarding schools.

The term, boarding school, conjures for many people visual images of preppy young people in ties, blazers, gray skirts or military uniforms. Others associate such schools with how they’re depicted in movies such as Scent of a Woman, Dead Poets Society, The Emperor’s Club, and of course, Hogwarts School of Witchcraft and Wizardry, Harry Potter’s home away from home.

Truth be told, boarding schools in which students live on campus during the school year are better described as environments where learning never stops. Lessons taught in these schools extend well beyond the walls of the classroom and the clock on the wall to include opportunities to teach and model self-confidence, independence, character, tolerance, compatibility, social etiquette, and teamwork. While maintaining a strong emphasis in academics, boarding schools, especially those for middle- and high-school age students, have the additional time with students to include life skill training alongside a rigorous academic curriculum.

Life skills needed to thrive outside the classroom

The Kiski School, an all-boys boarding school in western Pennsylvania, lists several essential life skills that boys will need in order to thrive in a broader community environment outside the classroom.  They are …

Manners and social skills are important

Boarding schools regard social etiquette and how to behave in various settings as important life skills for success. As part of teaching such skills, the Army and Navy Academy, a Southern California, all-boys, college preparatory boarding school, provides its middle- and high-school-age cadets with a pocket-sized booklet, “Manners for the Gentleman Warrior…A Guide to Gentlemanly Behavior.” The 28-page guide covers table manners, cell phone etiquette, how to dress appropriately, conversational etiquette, meeting and greeting people, escorting and treating ladies properly, and how to interview for a job. Few, if any, public schools have the time or inclination to teach these topics; yet developing these lifelong skills will have a great bearing on a young person’s ability to gain the respect of others after he graduates and goes on to higher education and into adulthood.

“There is no better way to win respect than by displaying social skills and good manners.” — P.25: “Manners for the Gentleman Warrior”…

The Big Picture on Boarding Schools survey of boarding school, private day and public-school students and alumni by The Association of Boarding Schools showed several examples of the impacts and perceptions among the three categories of students, including the following quantitative findings: