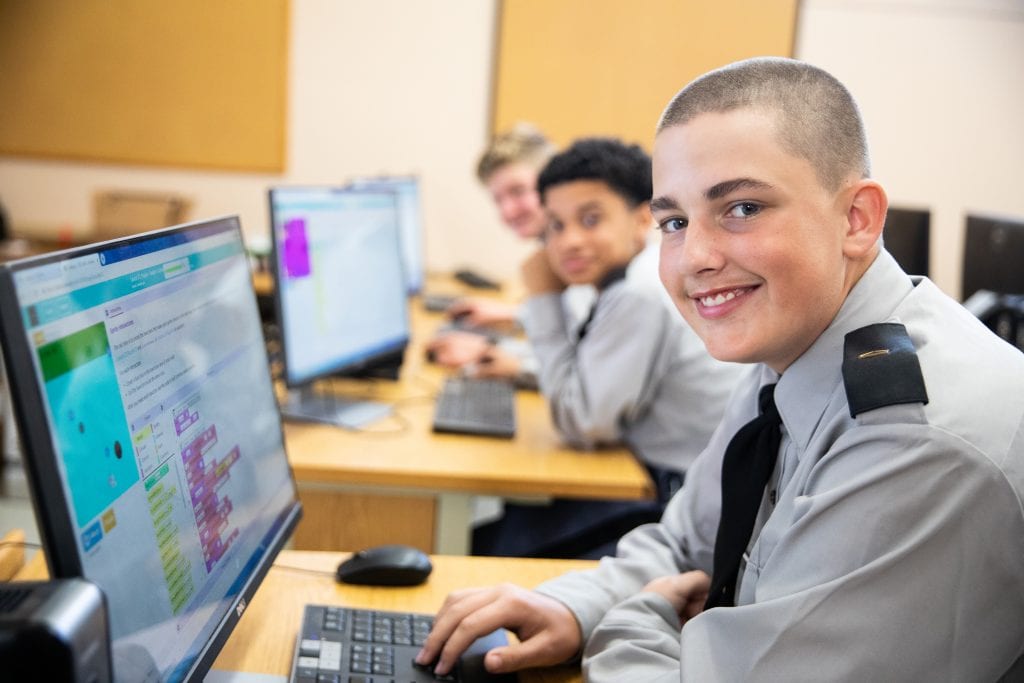 “Computer science (CS) is not about … how to use a word processor or create a spreadsheet. CS is about gaining computational thinking skills and a critical skill set that all students should have in the 21st Century workforce…” – U.S. Department of Education

The acronym STEM is becoming the dominant content descriptor of the present and future needs of our nation’s education system. Science, Technology, Engineering, Mathematics are the topics all of today’s young people will need to embrace to some degree to be prepared to succeed in tomorrow’s world of work.

Why are science, technology, engineering, and math important?

According to a March 2014 article in The Atlantic magazine, “…science and engineering occupations are at the leading edge of economic competitiveness in an increasingly globalized world, and science and engineering workforces of sufficient size and quality are essential for any 21st century economy to prosper. These professional workforces also are crucial for addressing challenges such as international security, global climate change, and domestic and global health. While they therefore are of great importance, college graduates employed in science and engineering occupations (as defined by the National Science Foundation) actually comprise only a small fraction of the workforce.”

The pathway to mastering these topics does not begin when students enroll in college or a Career Technology Education (CTE) program. It begins far earlier, even in middle (aka junior high) schools. That’s where the basics of science, technology, and mathematics need to be taught in order to prepare students later to focus on advanced courses they’ll need to become proficient and competitive in a global workplace. Middle school students who don’t get a good background in math, for example, are highly unlikely to make up for lost time in high school where intermediate and advanced levels of math are taught. In turn, mastering those courses in high school is a necessary requirement for being able to take courses later in college that are required in science, technology, engineering and math disciplines.

Three examples of how STEM learning is being applied

There are myriad examples of what public and private schools are doing across the nation to highlight STEM topics in their respective programs – to numerous to list here. But there are three STEM approaches now in place at a charter school, a traditional public school, and a private school worthy of taking note to illustrate STEM learning environments.

High Tech High (HTH) Is a San Diego County-based network of 14 charter schools for elementary, middle, and high school students whose several slogans include: “You can play video games at HTH, but only if you make them here.” Its technology-based curriculum is an obvious point of difference but the schools’ other distinctives include an integrated and project-based learning approach, small, open class meeting spaces, the display and exhibitions of student work, and student internships in the surrounding communities. HTH Director Ben Daley described the schools’ approach as … “teaching students to think deeply about content and then do something with their knowledge, not just race through a textbook.”

In Escondido, CA, that city’s high school district opened its Del Lago Academy Campus of Applied Science magnet school in the fall of 2013. Today, there are more than 800 9th through 12th-graders whose teachers and administrators address them as “scholars” and who undertake a curriculum that prepares them to apply science and technology to solve local and global problems through empathy, creativity, and collaboration.

Among the more innovative approaches to a STEM curriculum can be found at the Army and Navy Academy, a 110-year-old private boarding school in Carlsbad, CA for 7th- through 12th-grade young men. The Academy provides a leadership and character development program alongside a rigorous college preparatory curriculum that, beginning in the fall of 2018, includes a heightened emphasis on computer science. Additional elective courses being offered to cadets there begin with a preparatory “Discoveries” course for middle-school cadets. For the Academy’s high school-age cadets, a “Principles” course includes robust discussions on digital privacy, encryption, data science, machine learning, and digital citizenship as well as projects that teaches them to develop software, create webpages, and design their own programs.

Along with its increased emphases on computer science, the Academy also debuted its University of California-approved Warrior Aviation Course that adds an “A” to the STEM acronym by connecting aviation and aeronautics to the school’s science, technology, engineering, and mathematics emphases.

The Academy’s four-year aviation training course is in response to the growing worldwide shortage of commercial pilots. Estimates are that 255,000 new pilots will be needed to fill that gap by 2027 – less than a decade from now.

“The U.S. alone will need an average of 70 new pilots a day to keep up with the rapid rate at which current commercial pilots are or will soon be retiring,” said the Academy’s Dean of Academics. Ethan Segovia.

In addition to a strong academic foundation in STE(A)M topics, the Academy’s aviation program includes a pilot training component that readies senior cadets to obtain their pilot’s license. Cadets completing the program receive college credits to help them pursue advanced aviation courses at a four-year college or university.

The Academy’s extra-curricular Warrior Aviation Club to some extent overlays the aviation training program by offering cadets of all ages opportunities to explore local flying clubs such as the Civil Air Patrol, the Experimental Aircraft Association and to learn how to operate a drone.