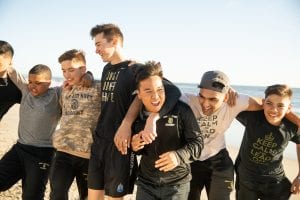 A little while back, an earlier blog touched on the Army and Navy Academy’s recently developed core commitment to “believe in the boy.” The phrase, otherwise referred to as the Academy’s “brand promise” came as a result of an exhaustive 15-month study on how better to communicate the Academy’s existing distinctives as a college preparatory boarding and day school for middle- and high-school boys located in Carlsbad, Calif.

According to the Academy President, retired U.S. Army Maj. Gen. Arthur Bartell, those four words, though recently coined, expressed what the school’s leadership had known intuitively in the school’s 110-year history – that greatness lies in every boy.

“However, for boys to succeed, they must first believe in themselves,” Bartell wrote in a recent magazine article. “Our focus is to always keep boys at the center and leverage the structure that only we can provide through our 24/7, around-the-clock experience as a boarding school.”

To best communicate its imperative to believe in the boy, the Academy’s new tagline speaks directly to the 7th– to 12th grade Cadets who attend, encouraging them to “Be Bold. Be Brilliant. Be You.”

“Through our three-part tagline, we’re encouraging our Cadets to pursue independence and leadership in all that they do,” the Academy President said.

So, what is meant by these three imperatives?

“Be Bold.”
“Boldness to me means standing up for what you believe in.” – David, 12th grade
The Academy believes big dreams begin with bold choices. The school encourages Cadets to aim high, set goals, and take action.  To quote a recent article: “As young men find out where they shine … they gain a profound self-awareness and we witness their growth, whether it’s igniting a deeper passion for learning, scoring a goal, acquiring a leadership role, forging new friendships or applying to college … when we believe in a boy and nurture his aspirations, he’ll discover the best in himself.”

A couple of ways Academy Cadets expressed boldness has been through the school’s Aviation Course and Club and its Computer Science program. Both have ignited a passion for learning while demanding high levels of attention, engagement, and intellectual curiosity.  Boys had a chance to ‘go bold’ as they tested their talents, expanded their skills, worked in teams, and ventured beyond their comfort zones.

“Be Brilliant.”
“I’ve become more confident here, and I have a really good support system. My friends and the staff are like my family.” – Zarif, 10th grade
Learning is so much more than academics. In addition to its college preparatory curriculum, based on the University of California’s rigorous A-G entrance requirements and several Advanced Placement (AP) honor courses as well as stated before, its popular training courses in aviation and computer science. That the Academy is primarily a boarding school for 9 out of 10 of its Cadets provides an optimum “learning never stops” environment to help Cadets realize their potential, both inside and outside the classroom.

Cadet Life at the Academy not only develops the Cadets’ intellect but also develops young men of character through reinforcing the Academy’s values of honor, integrity, respect, responsibility, compassion, and gratitude. The school’s JROTC component provides hierarchy and the rites of passage as boys progress to higher levels; learning structure, hygiene for better personal appearance; experiencing positive peer leadership, teamwork, and mentoring – all in a boy-centered environment.

Recent studies of the human brain show that boys, more so than girls, crave structure, hierarchy, and order as evidenced by their love for traditional sports where those traits are in evidence.  Important to note is that structure is not at the expense of creativity; rather, it creates unity and bonding with their peers.  Watching a football game illustrates the point; the players have positions, boundaries, and only as a team can they move the ball down the field. Boys shine brightly as individuals when they are part of an effective team.

“Be You.”
“Everyone makes mistakes, and no one is perfect. All the teachers and coaches at the Army and Navy Academy help us learn from those mistakes and grow into the men we will be.” –Zahour, 12th grade
The journey of self-discovery for boys (cadets) at the Academy begins by teaching them to live out their values; finding out where they “shine;” and testing the boundaries where they believe they can achieve – i.e. setting goals. The Academy encourages Cadets to stand out in a crowd, classroom or on an athletic field. Cadets are urged to “speak up” and “speak out” and “break out of the mold of being just like everyone else.”

The sense of brotherhood also helps Cadets build self-confidence and to be themselves. Many graduates over the years have said that the Academy’s emphasis on learning to experience brotherhood was the most positive, life-long “takeaway” from their time at the Army and Navy Academy. Through the school’s 24/7 Cadet Life experience, the boys had a unique opportunity to challenge one another to be their best selves, day in and day out, and that they made lasting memories doing so. The notion of brotherhood showed them that their fellow Cadets (brothers) will be there for them just as they will be there for others.