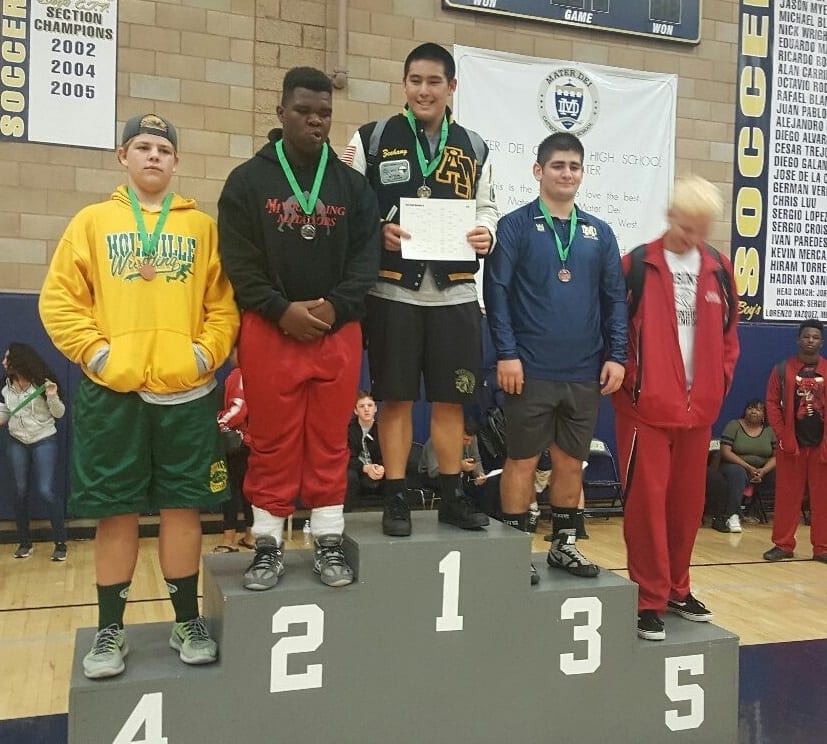 Jonathan Zhang became the second wrestler in the entire history of the Army and Navy Academy to qualify for the prestigious California State Wrestling Championship. The California State Wrestling Championship is a very difficult and highly competitive tournament. Of approximately 26,000 high school wrestlers in California, only about 500 qualify to wrestle at State. This represents about 2% of this total and Zhang was one of this elite group.

Who knew that when Zhang joined ANA as a shy 9th grader in 2014 with absolutely no experience in wrestling that he’d make ANA history? Zhang certainly didn’t expect it.

Jonathan Zhang is an only child who was born in Pasadena, California but was raised in China. He moved back and forth from China to the United States during his elementary and middle school years before finally settling down at ANA as a freshman high schooler. He knew absolutely no one at ANA, he didn’t speak English well, and all he wanted to do was go home. Zhang is also a shy student and claims he’s a better listener than he is a speaker. But now as a graduating senior, Zhang said that he stayed at ANA because “My classmates made it easier.” ANA started to feel more like home.

Because his father, Chi, Shangein, is the former Chinese national soccer team coach and a renowned soccer player, sports has always been an interest for Zhang. He joined the football team in 9th grade and played through 12th grade, but joined wrestling in 10th grade “to lose weight.” He also chose wrestling because he wanted to be good at another sport that wasn’t soccer, like his father. He wanted to excel in a sport that was all his own. 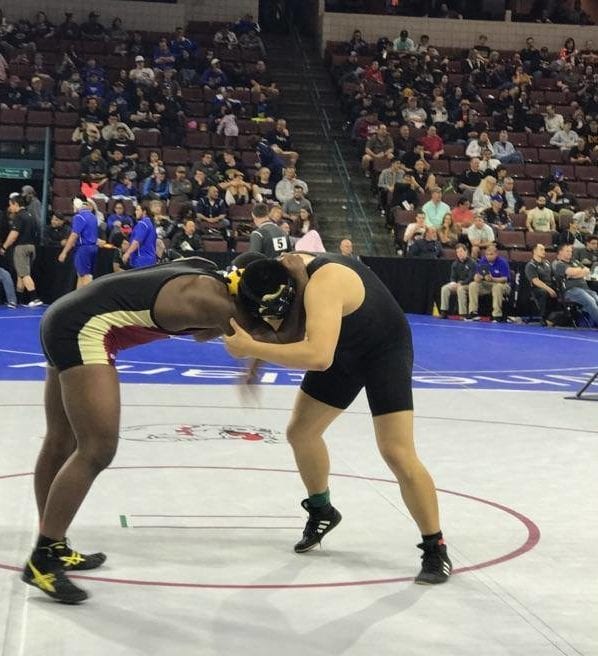 Although his initial motivation for wrestling was to lose weight, that motivation quickly switched to wanting to be a better wrestler after Zhang competed in his first tournament. He practiced, he worked hard, and he looked to his coaches and teammates as mentors along the way.

Coach Roye Oliver said, “It was an honor to coach him. In all my years, I have never had anyone put in 100% every day for a sport he didn’t know.”

Wrestling teammate Alex DeGraff also said that Zhang “is one of the hardest workers on the team. He inspires me and the team to get better. He’s an incredible teammate and friend.”

During his junior year, Zhang was very excited to be on the varsity wrestling team, but Zach Schrader (one of ANA’s most accomplished wrestlers) went to State as well. Because Zhang and Schrader were in the same weight class, Zhang had to wrestling under the junior varsity team during the state championships. Even though Zhang wasn’t going to wrestle as varsity, he still kept his head up high and of his fellow wrestler, Zhang said, “I thank Zach Schrader for mentoring me and being a great wresting partner. We set a goal together to make it to State and we both did it!”

This year as a senior, Zhang comes back confident but nervous for the CIF (CA Interscholastic Federation) Championships. His coaches and Zhang, himself, believed that he would do well, but becoming CIF Champ was certainly a surprise to him. He also wrestled in the tournament with an injury but pushed through despite the soreness and stiffness in his knee. Being able to overcome pain and still wrestle extremely well is an example of the mental toughness that is exhibited by top wrestlers and this quality definitely led Zhang to qualify for the State Championship. Though Zhang went 2-2, he did not place in the overall competition, but he still came out a winner. He increased his confidence with a very strong sense of accomplishment in competing at State and is the league champ as well as the CIF Champ for the San Diego section.

When asked how he became the CIF Champ for the region, Zhang attributes “great coaching, determination, working hard when it’s time to work hard, and the pride I have in representing my family.” He also credits his mom for raising him to be a respectful, polite, and hardworking individual: “I have to thank my mom for always supporting me.” 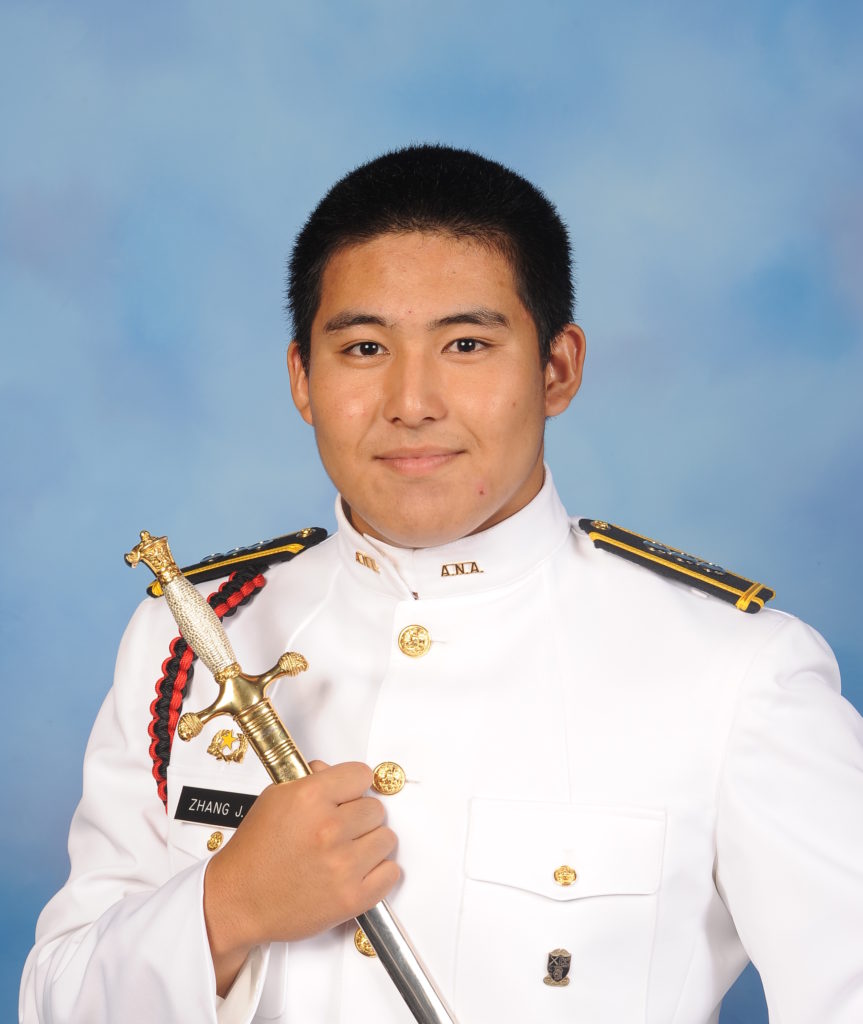 Zhang would like to thank:“Mr. Segovia for coming and supporting me and having interest in me as not only a student, but as a student athlete.” Ethan Segovia, Dean of Academics said, “In all my years, I’ve never met a Cadet that was such a hard worker who was so balanced, friendly, and positive. Jonathan always has a smile on his face and I’m proud that he has taken advantage of every opportunity that ANA has to offer.”

“To all my coaches, you’re all very important to my success. You taught me how to wrestle because I never wrestled before and you took care of me.” “Thank you Coach Oliver for making me interested in the sport.”

Zhang is graduating with a 4.0 average GPA and has been recruited by UCI, Bacone College, and Brown University. He has also lost 20 lbs. since his first day of wrestling.

Here is Zhang’s speech from the wrestling banquet night on March 16, 2017:

Good evening everybody. My name is Jonathan Zhang and I’m the team captain of the wrestling team. This year has been another memorable year for the ANA wrestling team. This year, our team has achieved beyond expectation. We won another league champion title as a team, we had 3 wrestlers place in the CIF division 4 tournament, 2 wrestled at CIF San Diego section masters, and finally 1 made it to California state championship. These are very impressive accomplishments. 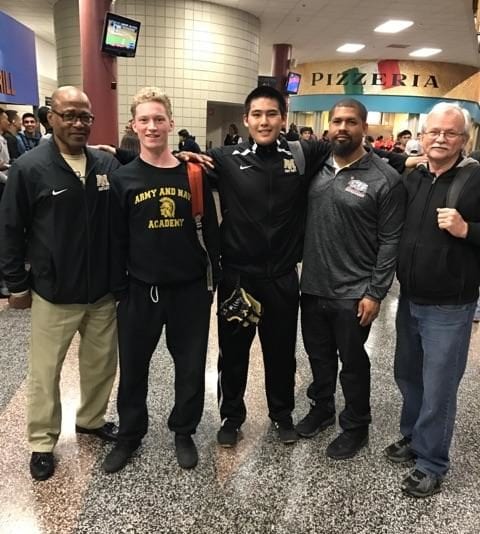 I started wrestling my sophomore year at ANA and I think these 3 years have been fun and lots of cutting weight, but I want to say this to the underclassmen. Wrestling is more than a sport; it’s your attitude toward life. Wrestling asks a lot from you, your weekends, your sodas, and your video games. When you need to wake up at 5 in the morning to go to tournaments which you trained weeks for, it is no different than waking up for a job, so you wake up. When you need 2 points in the last period, you push yourself to the limit to get those 2 points to win, like in life you just don’t give up on things. But after all, you’re suppose to have fun with this sport, treat this sport with a positive attitude and also treat your life with a positive attitude.

I want to thank Sgt. Adler for his support of this team and for being a great practice partner of mine. I wish you the best of luck for your wrestling career. I want to thank Coach Chris and Coach Steve. Thank you guys for these 3 years of coaching and taking care of me. Thank you guys for teaching me all the skills I need to compete in state. Finally, I want to thank Coach Oliver. You are the one who brought me into the world of wrestling and showed me how how much I can accomplish. I could not make it to state without you. I just want to thank you for making my time here at ANA a memorable one. Thank you everybody for coming tonight and thank you for supporting ANA wrestling.