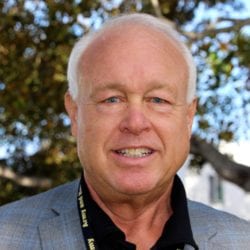 Brad attended Army & Navy Academy from 1967 to 1972, starting at Camp Pacific. He graduated at the top of his class and held the rank of 1st Lt., also serving as Class Secretary during his senior year.  He played JV and Varsity Tennis for Coach Harold Moses, holding the #1 ranking most of that time.  He attended Cal Poly University Pomona and Saddleback College earning a degree in Business.  The entirety of his career has been at his family’s privately owned, 5th generation 80 year old enterprise, Maclin Markets, Inc.  Maclin operates multiple Open Air Markets as well as the original livestock auction business in Southern California. He was nominated “Entrepreneur of the Year” for the Inland Empire.  Brad’s primary home is in Laguna Beach. He and his wife, Liza, enjoy traveling, visiting over 50 countries so far.