“Boys must find ways to compete and see themselves as performing well. If they do not … they’ll compete against society itself, abusing their community and themselves.” – Michael Gurion, author, “The Wonder of Boys: What Parents, Mentors and Educators Can Do to Shape Boys Into Exceptional Men.” 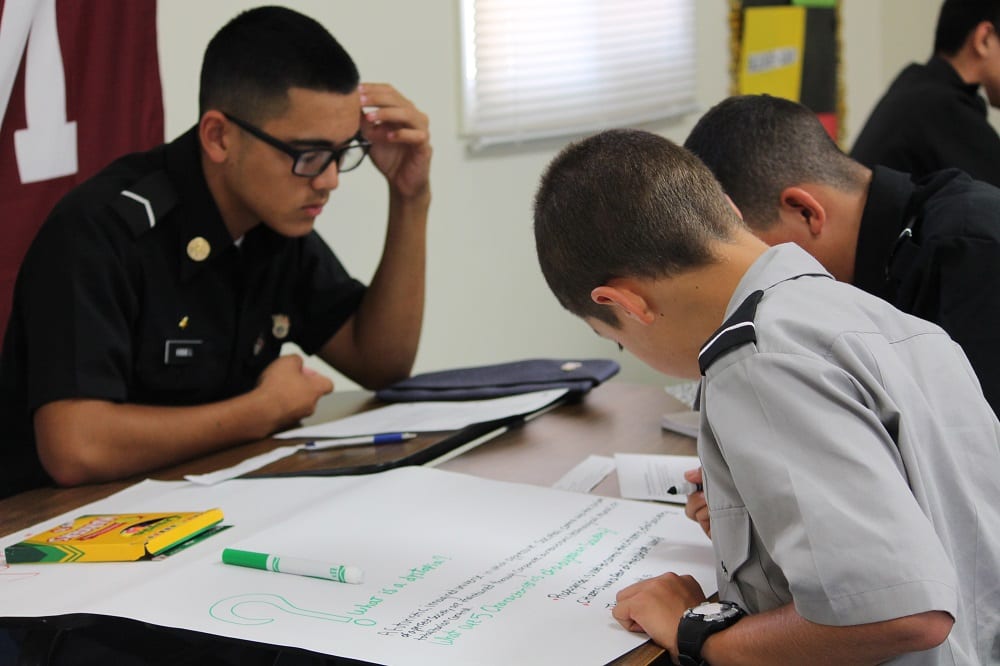 While there have been all-boys and all-girls schools in place for centuries, it’s only been in recent years that scientific research has shown why such schools are the better option in many cases for educating young people. What’s been considered “old-fashioned” and even counter to today’s notion of gender equity is experiencing greater attention as schools – both public and private – look for better way to shape – in one case boys – into successful men.

It was cultural and social norms – not scientific findings – that had been the rationale for all-boys schools in decades past. Military academies, such as the Army and Navy Academy in Carlsbad, Calif., knew from first-hand experience that middle- and high school-age boys tend to thrive in a single-gender, military-oriented setting where the moral concepts of duty, loyalty, compassion, honor, integrity, courage, respect, and gratitude are important parts of a boy’s education.

But the value of a single-gender learning environment for boys goes far beyond an emphasis on character development. Recent studies show that boys are failing in the standard co-educational school systems. In such settings, boys typically get lower grades than girls; they are more likely to be suspended or expelled; more likely to be prescribed ADHD medication and be placed in special education programs.

In recent years, scientists who study how children learn as well as the physical structure of the human brain have learned why there’s the need for different learning environments and methodologies for boys and girls. Their conclusion is based on one primary finding: Boys learn differently than girls, based on their biology.

A few reasons why boys learn differently than girls.

Author and social philosopher Michael Gurian operates an Arizona-based institute bearing his name that trains educators, counselors, parents, and other child advocate agencies on teaching practices that optimize learning for each gender. Gurian’s research, as well as that of others has identified several behavioral traits of how boys learn differently than girls, including the following:

Some benefits and results of an all-boys learning environment

·        Single-gender schools for boys adapt their teaching strategies and physical environment to focus on the specific methods, techniques, and best practices to help boys become more engaged in learning and better all-around students.

·        A single-gender learning environment, such as the all-boys Army and Navy Academy, reduces distractions that would occur in co-educational settings when boys pay more attention to their gender counterparts than pursuing their own personal development skills.

·       Students are often more willing to take risks to excel academically when they feel safe from the fear of failing in front of classmates of the opposite sex.

·        A single-gender educational setting provides boys the comfort to pursue extra-curricular roles that appeal most to them as well.  Again, using the Army and Navy Academy as an example, that school’s middle- and high-school-age boys have the opportunity fill every role in a traditional school setting; from student government, cadet corps, and sports leaders to scientific experts and even literary or performing arts “stars.”

A three-year study by Stetson University of the effects of gender-tailored curricula was tested a few years ago in a Florida public school where a group of fourth-grade boys was divided into two cohorts – one co-educational, the other all boys. The same number of students in each class covered the same curriculum. At the end of the study, the boys in the all-boys group produced dramatically higher proficiency scores in reading, science, math, and writing on the standardized Florida Comprehensive Assessment Test (FCAT) than the boys in the co-educational class – 86 percent compared to 37 percent respectively.

A similar study several years ago in Washington state reported that a cohort of boys who were moved into a single-gender educational setting moved from the 10 and 30 percent performance rankings they had achieved in co-educational classes on the former Washington Assessment of Student Learning up to 73 percent in an all-boys class.

How to help boys learn to become successful in school

So, how can schools teach boys effectively? Gurian listed several essential strategies in an article published by the Association of Supervision and Curriculum Development a few years ago.  What follows are few strategies teachers can use in teaching boys:

·       Increase the use of graphics, pictures, and storyboards in literature classes and assignments.

The more learning that is hands-on and project-driven, the more boys’ senses will be engaged in learning, causing more information to be retained, remembered, and displayed on tests and assignment.

Examples include content-related games and activities for which there are achievable goals.

·       Include skills training in time management, how to do homework successfully, and class management. The classroom is the optimum venue for boys to learn how to manage time, do homework, and follow directions.

·       Leave 50 percent of the reading and writing choices in a classroom to the boys themselves.

Non-traditional materials such as novels, magazines and even comic books increases boys’ engagement in reading and improves both creative and expository writing.

·        Move around the classroom during class. A teacher’s physical movements increase boys’

Engagement and moves the teacher closer to the boys to use “brain breaks” – quick, one-minute brain-awakening activities that keep boys’ minds engaged.

·        Allow boys to move around as needed in classrooms while learning and practicing self-discipline in how and where they can move. This strategy is particularly useful when boys are reading or writing. When boys twitch, tap feet, stand up or pace, they are often learning better than if they sit still.

·       Demonstrate respect. Boys are constantly checking teachers to see if they respect them.

They respond well to teachers and others who have expectations of them and respect them as being capable of meeting those goals.

·       Have clear signals as to who is in charge. Boys especially need boundaries They respond to

teachers who are fair, funny and respect their points of view. They do better with teacher-led learning parameters.

·       Control where they sit if necessary. Move boys who appear not to be paying attention to

the front of the classroom.

chat with others. School sites need to provide quiet spots for thinking

·       Use a non-verbal physical signal for silence. Boys are particularly adept at screening out

white noise which includes teachers verbally requesting and even yelling for silence. Therefore, teachers should “train” their class to observe visual cues, such as raising a hand, turning the lights on or off, or moving to a pre-designated spot in the room. Never, ever yell.

·        Value them. Boys are tuned into hierarchies. Pre-determined values of a classroom will play

a powerful role in guiding their actions. Have a couple of core values, such as compassion, generosity, teamwork, etc. in place; insist on them being observed and most of all, live by them.

·       Have as few rules and words as possible. A teacher should have no more than three clear rules of conduct that are applied fairly and consistently. Classroom management should be based on the simple idea of, “I won’t let this happen to you and I won’t let you do it to anyone else.”

Understanding the differences between how boys learn differently than girls and doing something about in the school classroom is critical to better preparing boys to become successful adults in tomorrow’s world.