The Link Between JROTC and Character Development 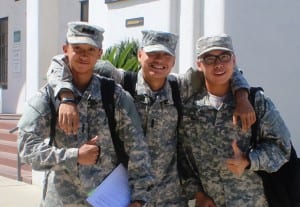 In recent years, character education has become a hot topic in the United States.  As the social and cultural landscape changes, the need for moral and value-based education increases.  Research has shown that JROTC programs are exceptionally effective in teaching character and having a positive, long-term impact on participants.

Character can be Taught

A study by Dr. Cletus R. Bulach concluded that good character is a quality can be taught.  Further, he found that JROTC programs are a particularly effective method for promoting character development.

To conduct his research, Dr. Bulach presented a survey to 477 students at a high school in Atlanta, GA.  277 of the students were in JROTC, the other 200 were not.  The survey asked students 96 questions based on 16 predetermined character traits, including aspects of Army and Navy Academy’s core values of honor, integrity, respect, responsibility, and compassion.

He found that there were significant differences between the two groups’ survey responses.  “JROTC students tended to agree with positive behaviors and disagree with negative behaviors” far more often than their non-JROTC counterparts.  He concluded that “the issue of whether character traits can be changed is no longer a question.  The JROTC students in this study came from the same community and population as the other students and their conduct on the behaviors associated with 16 character traits was superior.”

Army and Navy Academy places a strong emphasis on character education.  Character education is a key component of the Academy’s mission statement and also one of our pillars.  Our core values of honor, integrity, respect, responsibility, and compassion shape all interactions, both inside and outside the classroom.

A Curriculum for Life

Historically, JROTC programs were designed to prepare students for the military.  This is no longer the case.  Today, JROTC education “prepares students for responsible future leadership roles, while making them aware of individual rights, responsibilities, and privileges as American citizens.”  Emphasis is placed on personal responsibility, which in turn leads to community awareness and civic engagement.  Dr. Bulach describes this as “a life skills’ curriculum.”

This is the approach taken at Army and Navy Academy, where our mission is to educate and develop young men of good character.  The Academy curriculum includes classes on leadership and citizenship, preparing our cadets for the future and instilling values and the skills for academic achievement that make them ready for college and life beyond.

Why Does This Work?

First, a JROTC program offers a different degree of modeling behavior for students than other types of school programs.  The Academy’s JROTC instructors are former or retired military personnel, who not only teach character development, but also exhibit good character through their own actions and words.  The modeling of positive character traits is a key to teaching young men.

Additionally, the aspect of making an active choice to be a part of the program plays a role.  At Army and Navy Academy, commitment to attend is a major factor in determining admission.  Only students who are fully committed to attend are admitted to the Academy.  This gives a sense of belonging that is often absent from other schools, and creates a community where good character is encouraged and rewarded. Cadets know what is expected of them, and know that there are consequences to disregarding the Academy values.

This provides even greater evidence of the importance of character education.  The character-based curriculum at Army and Navy Academy improves our students’ academic success, leading to increased grade point averages and an impressive list of college acceptances.

The Army and Navy Experience

There is a clear relationship between academic success and character development, and the Academy’s focus on both of these aspects of education give cadets an advantage that can’t be found at other schools.  Our JROTC program develops students who are prepared for life in college and beyond, to become respected leaders in their communities.  The Army and Navy Academy experience truly allows cadets to reach their full potential as young men of good character.